Comedian and actor, Arie Kriting has opened a competition since June 14, 2022 to hunt down vandals or doodles carried out on a number of historic cannons in the cultural heritage area of Fort Keraton Buton, Baubau City, Southeast Sulawesi. 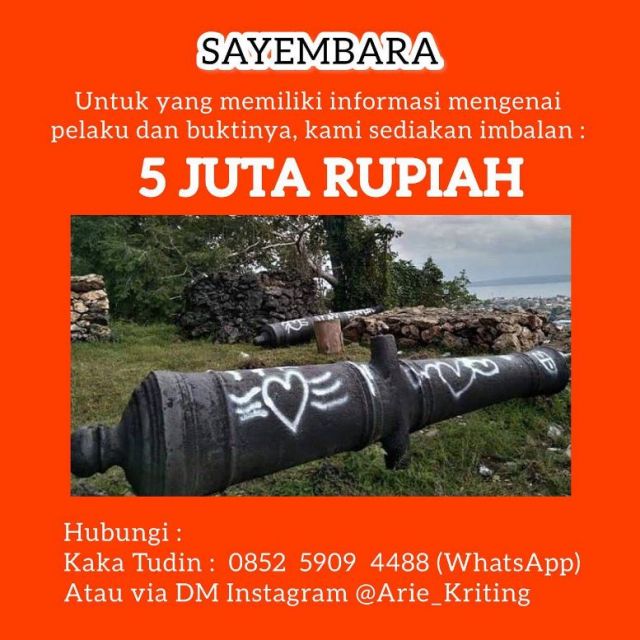 On Tuesday (14/06), Arie Kriting informed that there were vandals who scribbled on a number of historic cannons in the cultural heritage area of the Buton Palace Fort, Baubau City, Southeast Sulawesi.

The information was uploaded by Arie Kriting through his personal Instagram account, which was followed by the opening of a competition to find the perpetrators of the vandalism.

“CONTEST. For those who have information about the perpetrators and the evidence, we provide a reward of IDR 5 million,” wrote Arie Kriting on the photo he uploaded through the Instagram account @arie_kriting.

According to Arie Kriting, anyone who commits acts of vandalism must dare to take responsibility and accept the consequences of their actions.

“Daring to commit acts of vandalism by crossing out historical heritage in Tanah Buton, must have consequences,” wrote Arie Kriting.

On the following day, Arie Kriting informed that the reward from the competition had increased to IDR 7 million. Furthermore, for those who dare to take responsibility, Arie Kriting will seek reconciliation actions.

“For the perpetrators, if they want to be responsible, regret their actions, and promise to participate in preserving the inheritance of our ancestors, you can DM me or contact the contact listed. We are trying to reconcile,” wrote Arie Kriting. 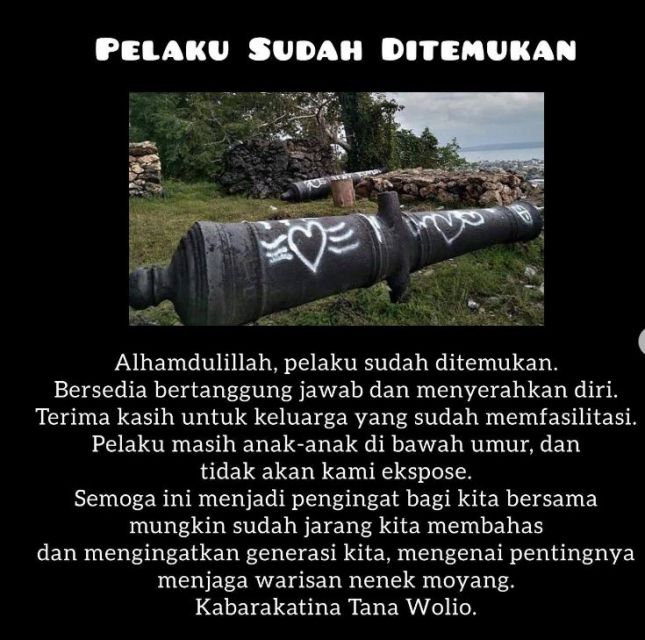 After two days of being informed about the competition, Arie Kriting finally found out who the vandals were who had scribbled a number of historic cannons in the cultural heritage area of the Fort Keraton Buton.

Through the information uploaded by Arie Kriting, the perpetrators of the vandalism are children who are still under the age of 8 and 9 years.

Then Arie Kriting said that the actions taken by the children could be used as lessons to continue paying attention to the nation’s cultural and historical heritage.

“In my opinion, maybe through the hands of these children, we are reminded to pay more attention to the cultural and historical heritage of our nation,” wrote Arie Kriting.

Furthermore, Arie Kriting said that the coaching process for the perpetrators was left to the families and related parties.

Dea Ananda and Ariel Nidji have their first child after 12 years of marriage
Marshanda Talks About Death in His Podcast, Denny Sumargo Panic
Comment